Islam teaches us to appreciate beauty, both Divine and created and according to our beloved Prophet (SAW) “Allah is beautiful and loves beauty.”

Indeed, our essential nature or fitrah inclines toward beauty. As Muslim women, we do not display our beauty publicly, but we are encouraged to beautify ourselves in private and for our husbands.

Husbands are also encouraged to beautify themselves for their wives. Ibn ‘Abbās reportedly said, “I love to beautify myself for my wife, just as she does for me” (referring to Surah al-Baqarah 2:228).

The Quran and Sunnah contains many beauty tips and we will be discussing four of them namely: Miswāk, Henna, Kohl, and Perfume. These treatments pre-date Islam and have been used since ancient times. It is interesting to note that many beauty treatments in the Sunnah also serve therapeutic purposes.

Before embarking on any beauty treatment, remember that all acts in Islam are judged by intentions. So, if your intention is to exalt and implement the Sunnah, then beautifying yourself can become an act of worship. 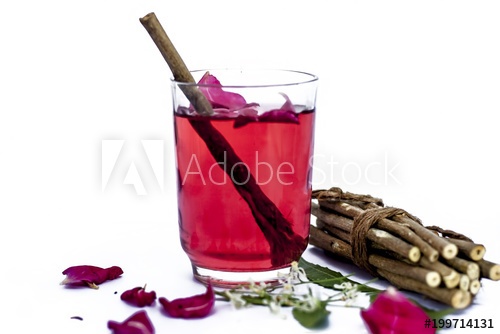 It is Sunnah to clean your teeth with Miswāk, a small stick which is rubbed on the teeth. By chewing one end and separating the fibers, a brush is formed and the chemical properties of the wood is released. The Prophet (SAW) cleaned his teeth with a Miswāk before every prayer (and other times as well), he said that if not for the distress it might cause believers, he would have ordered us to do so as well. 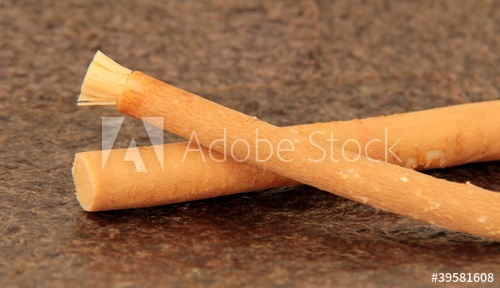 The best Miswāk is made from the wood (roots, twigs and stem) of the Salvadora persica—a small tree known as Arāk or Peelu. According to “Medicine of the Prophet” by Ibn Qayyim Al-Jawziyya, when used in moderation, it cleanses the teeth, prevents cavities, and sweetens the breath in addition to several other benefits. Modern science appears to agree, some studies show that using Miswāk (from the Salvadora Miswāk should be washed before and after each use, and its brush end cut periodically. It should never be used in the bathroom area, should be moistened with rosewater if dry and stored vertically.

Using miswāk is full of blessing. The Prophet (SAW) said: “The tooth-stick is a means of purifying the mouth, and is pleasing to the Lord.” (Shafi’i) Another hadith states, “The prayer before which the tooth-stick is used is seventy times more excellent than that before which it is not used.” (Baihaqi) 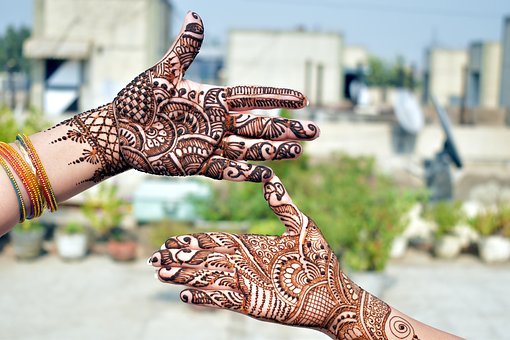 Henna is made by grinding the dried leaves and stems of the Henna plant Lawsonia inermis into a fine powder and then mixing it with water or oil to make a paste. At the time of the Prophet (SAW), both men and women used henna to dye their hair. Women also used henna to stain their hands and feet.

Narrated Aisha (RA): “A woman made a sign from behind a curtain to indicate that she had a letter for the Apostle of Allah (SAW). The Prophet (SAW) closed his hand, saying: “I do not know if this is a man’s or a woman’s hand.” She said: “No, a woman.” He said: “If you were a woman, you would make a difference to your nails, (meaning with henna).” (Sunan Abu-Dawud) 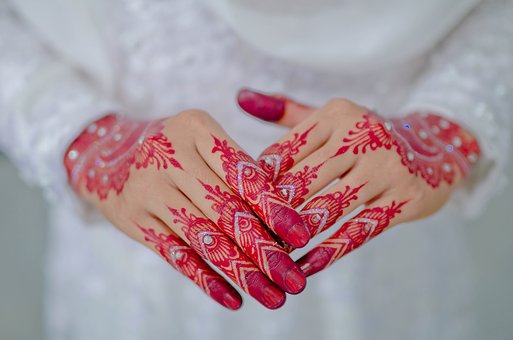 The paste is applied directly to the skin, often in elaborate designs, with an applicator bottle or a mylar cone, a flexible cone-shaped container that resembles a small pastry bag. The paste dries on the skin and when removed, leaves a temporary stain (called mehndi) which lasts about 1 to 3 weeks. Pure henna produces shades of orange-red-brown depending on skin chemistry, area of body applied, and the length of time the paste remains on the skin.

You must use fresh henna paste within a few days. Otherwise, leftover henna can be wrapped tightly and stored in the freezer for several months. Make sure you defrost before using. 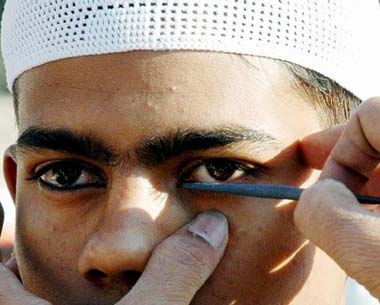 Kohl is a fine dark powder applied to the conjunctive (inner) surface of the eyelids. Wearing kohl is Sunnah for both men and women as an ordinary adornment (see Qur’an 24:31) and for therapeutic purposes.

The Prophet (SAW) is reported to have said: “Apply antimony [kohl], for it clears the sight and makes the hair grow.” (Tirmidhi) 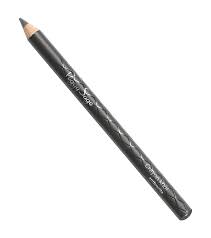 Kohl typically is sold with a kohl pot and stick, which should have slightly rounded ends. To apply, moisten the stick with water, rosewater, or olive oil before dipping it into the pot. Twist the stick in the kohl and remove the excess powder with a shake or quick flick of the wrist. Begin by placing the stick in the inner corner of your eye. Close your eyes ever so lightly and then carefully move the stick outwards between the lightly closed lids. The kohl will actually touch the eye. Re-powder the stick before applying it to the other eye. If done correctly, the eyelids will be completely black at the roots of the eyelashes (i.e., no white should be showing). If you wear contact lenses, it is suggested to apply the kohl before inserting the lenses.

Scents are mentioned frequently in the Sunnah. For example, several hadith refer to the fragrance of Paradise, one of which tells us that it can be discerned from a distance of forty years of travelling.

According to other hadiths, the breath of someone who is fasting is sweeter to Allah (SWT) than the fragrance of musk. The Prophet (SAW) himself is described as having a beautiful natural odour more fragrant than musk or ambergris.

The Prophet (SAW) used perfume regularly and so did the Sahabah (RA). He (SAW) said, “I was made to love three things in your world: women, perfume, and the coolness of my eye in the prayer.” (an-Nasaa’i)

While it is Sunnah for a man’s perfume to have a detectable scent in public, a woman’s perfume should not be apparent. Of course, with our husbands or others with whom we can display our beauty, the fragrance can be noticeable.

While the words “attar” and “perfume” often are used interchangeably (as here), they involve different production methods. Attars are produced through a distillation process, which has been explained simply as “the pure extract of flowers in sandalwood oil”. 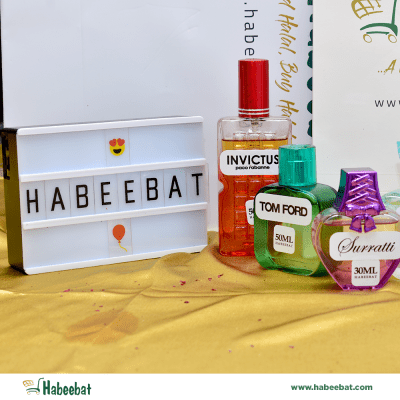 The word “perfume” is derived from the Latin phrase ‘per fumum’ meaning “through smoke.” Originally, extracted oils of plants were burned to release their fragrance. Unfortunately, today many perfumes are alcohol-based and have synthetic additives.

When choosing a fragrance, find one that compliments the natural aroma of your body and test it on your skin because everyone’s skin chemistry is different. The same fragrance might smell very different on someone else or inside the bottle.

A fragrance should be applied right after you bathe when your skin pores are open and will absorb the scent. Never use deodorant soap on the areas where you apply perfume as it will change the smell. Wear more fragrance if you have dry skin as the lack of oils weakens the scent.

Cold also weakens the scent so apply fragrance to the warmer parts of your body such as the wrist, inside of the elbow, neck, stomach, and back of the knees. Do not apply it behind the ears as it may result in an unpleasant odor.

Finally, experiment with different fragrances throughout the year. Some work better in hotter temperatures and others in cooler. 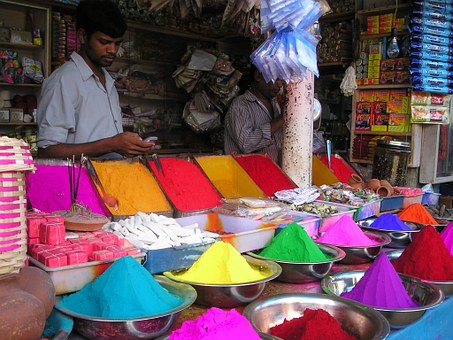 While appreciating and enhancing one’s beauty is encouraged in the Sunnah, it should be kept in perspective. “Surely the noblest among you in the sight of Allah is the most God-fearing of you.” (Surah al-Hujaraat 99:13).

The Prophet (SAW) stated, “A woman is married for her wealth, her reputation, her beauty, or her religion. Choose the religious one or you may be ruined.” (Bukhari). It is therefore important that you make piety the first form of beauty that you can have, because a beautiful heart is a beautiful being no matter the physical appearance

So have fun and beautify yourself according to the Sunnah but remember – it is your inward beauty, and not your outward appearance, which makes you most beloved to Allah (SWT).